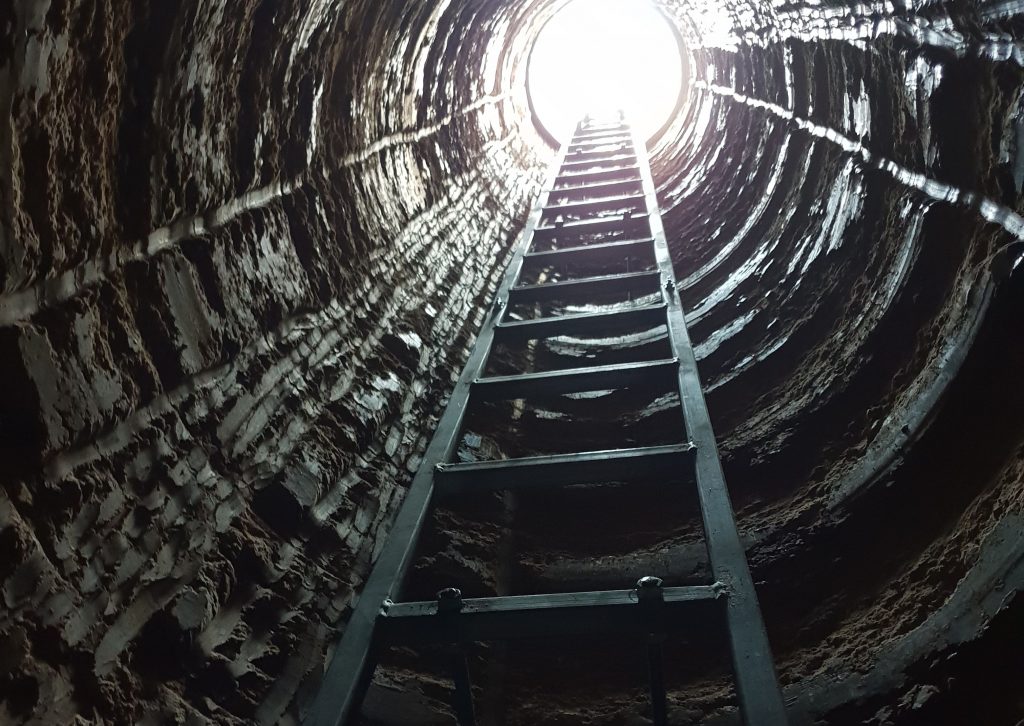 A whole side of a street is to be demolished in Workington, Cumbria after a mine shaft was discovered under the properties. The decision followed alarming evidence of subsidence which has led to uncertainty and concern over the future, especially for those forced to relocate out of the family home.

The people of Workington have been mining coal and iron ore for over 400 years. As the Industrial Revolution took hold, the town began to expand rapidly as more and more workers arrived to meet the growing demands of its mining industry.

By 1802, the people of Workington’s mines were producing over 65,000 tons of coal each year. The town’s success was built not just on being sat on top of a large store of coal and iron ore. It had its own port which meant that minerals could be transported quickly and easily to all corners of the country.

Hunter Street is an attractive row of stone terraced houses that sits adjacent to the Hope Pit, built in the 1780s.  In November 2018, Allerdale council were contacted by residents about localised ground movement affecting one of the homes. Research by the Council using an 1843 map showed that two of the properties were directly above a 180 metre shaft that was part of the pit works.

Over the years, as the mines became no longer productive, they were closed or abandoned. Some were capped with wood, backfilled with mine waste, rubble and soil. Over the centuries the wood has rotted, and underground water eroded the soil and backfill.

In March 2020, concerned residents attended a public meeting, chaired by local MP Mark Jenkinson, the Council and the Coal Authority (CA) to discuss the findings. They were told that there was no need for concern and that steps had been taken to secure the site, outlining what would happen over the next few months.

Because the issue is due to coal mining legacy, it is the statutory responsibility of the CA to manage, with the first priority to safeguard residents’ safety and provide peace of mind.

In short order, they installed monitoring, injected resin foam right above the shaft to ensure loose material could not accelerate the subsidence from the initial collapse, engaged with residents and stakeholders and undertook two phases of ground investigation to ensure that the geology matched the historical plans.

They determined a wider “collapse” zone of seven houses that would need to be demolished to create a permanent bridge space with platform and rig. They would then need to drill down to the base, grout the shaft with cement, sand and gravel, then put a cap on top.

The CA purchased three of the seven houses through the spring of 2020, tendered demolition works to local contractors and sought planning approval for demolition and to close the road. The drilling, grouting and final reinstatement of the site was targeted for August.

It would not be possible to build on the top of the remediation area once the shaft was filled in, but could be used for parking or public open space, depending on the extent of the site.

The CA was confident that other properties in Hunter Street would not be affected after the remediation, but that an entire side of the street would need to be removed.

Despite the positive feedback about the Coal Authority’s response and support, residents being forced to relocate are despondent about the move and do not know when they will leave the street – a problem that has been compounded by the Covid-19 pandemic.

Work to knock down homes has been delayed and The Coal Authority still do not have a date for when the process will begin. So, while the residents know their properties will be bought at some point, lives already in lockdown seem even more on hold for the half of the residents of Hunter Street.

Each Year in the UK an Average of 15 Mine Shafts Collapse. Every week, somewhere in the UK there is a claim made to rectify the damage from the legacy of mining.  Around £40 million of damages has been paid out to properties in the last decade – and that is just in coal mining areas.

The Coal Authority record some 150,000 coal mine shafts and other mine entrances, representing 25,000 sq.km if tunnels across the UK.  It is thought that there are many potentially more dangerous, shallow older mines that were more informal that have gone unrecorded or are “missing”.

Some 130,000 properties are within 20m of a mine entry, so the legacy of mining has a huge impact on our future developments.

With our increasing population and urban growth, residential and commercial property is developing into all areas. Therefore property buyers need to be fully aware of the risks and what lies beneath their proposed investment.

Will it affect your Client?

Conveyancers are already required to undertake detailed due diligence in coal mining areas by ordering an approved coal mining search based on the CON29M standard format of questions.

To better understand these risks, a new breed of CON29M report has been launched by Future Climate Info. FCI’s heritage is founded on coal mining. Our Chairman, Geoff Offen, is a qualified coal mining surveyor, the architect of the very first CON29M search report and co-founder of the standard coal mining search scheme.

The FCI CON29M report and Premium Plus CON29M, which includes environmental and coal mining risks in one combined report, now offer a clear, professional opinion for lenders, conveyancers and homeowners alike.

It may be that the risk is minimal and the opinion can give all parties confidence. However, it may reveal hidden risk and an influence that you want to head off before exchange.

Fully compliant and Law Society Approved, the reports are backed by Coal Authority data and crucially include a triple tier insurance cover. This unique feature covers your client for:

For more information on Future Climate Info’s Mining Search reports contact us on 01732 755 180 or email us at info@futureclimateinfo.com,