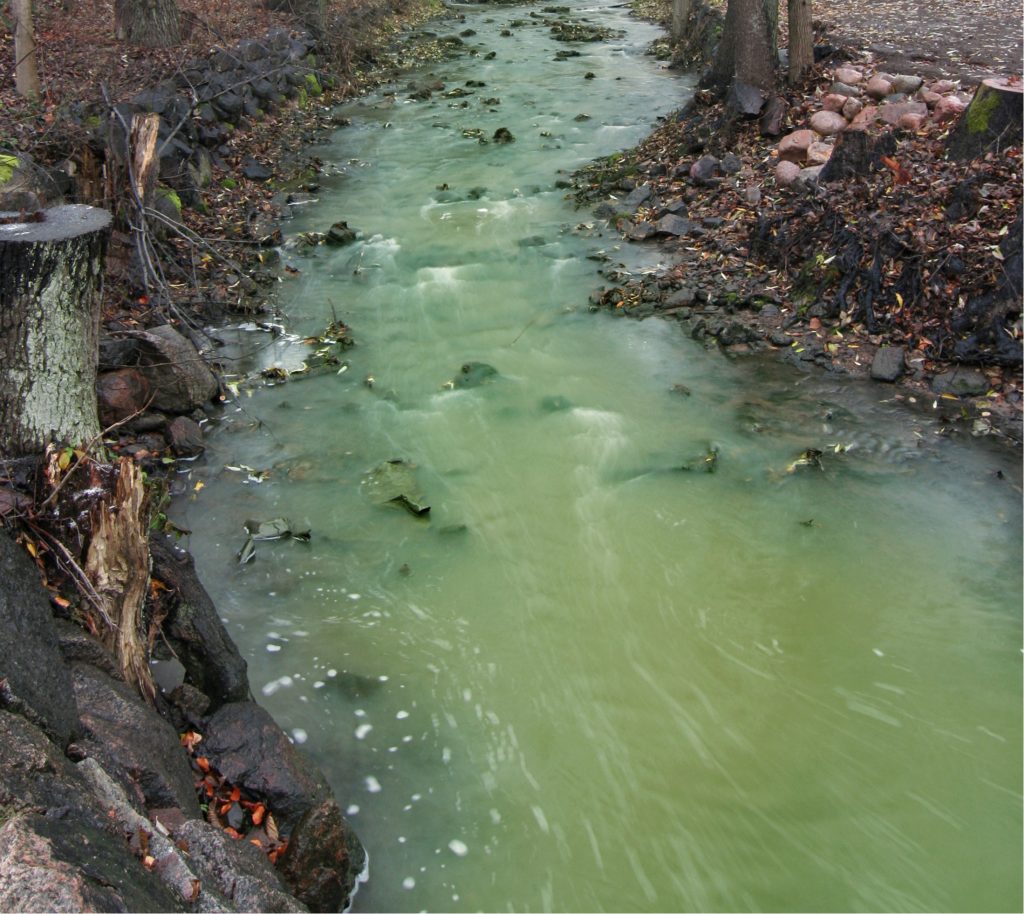 A park in Glasgow was sealed off after children playing in a stream noticed it had turned a vivid green. It was the latest in a string of pollution incidents from a former chemical works as the city looks to regenerate for the future.

Polmadie Burn runs through Richmond Park and flows into the River Clyde to the south of the city. Never has a stream name been more apt. The area was sealed off when tests revealed that the water was contaminated with high concentrations of hexavalent chromium (chromium IV). This is a chemical that irritates skin and eyes, can cause asthma, kidney and liver problems and lung cancer.

The Shawfield area of Rutherglen has played host to a wide variety of heavy industries, the most prominent of which was the chemical company, JJ White. Founded in 1820, JJ White was the largest of its kind in the UK. At one point they produced 70% of the country’s chromate products for use in the tanning and printing industries.  Until it was shut down in 1967, the firm had a long and controversial history, particularly around the health and safety of workers in the factory. This gives a clue as to the prevailing risks today.

Workers at the chemical plant came home covered in dust, marked by “chrome holes” from burns in the skin. They were known locally as ‘White’s Whistlers’ due to the caustic air that also damaged their eardrums and nasal packages.

The site extended to 12.15 hectares (Ha), of which 4.85 Ha were set aside specifically for waste. This is now known to have not been large enough.  The company dumped huge quantities of toxic and highly alkaline chromite ore processing residue (COPR) in clay pits and mines around Rutherglen, Cambuslang and East Glasgow – a practice which was legally permissible at the time.

The sodium dichromate it produced is now a substance of very high concern under EU REACH Regulations. It requires authorisation for use, due to being carcinogenic and reprotoxic, among other hazards.

As well as dumping waste, slag contaminated with chromium was used in building foundations and even deposited in open air sites such as football grounds.

Hexavalent chromium is highly soluble in water, meaning it can travel underground and into water courses.

Periods of heavy rainfall would regularly result in local tributaries overflowing with the subsequent flood waters reaching street level.  The stream had been known to turn green on occasion for many years, during which time children played without a second thought.

Investigations established that the Polmadie Burn was becoming contaminated with chromium flowing into it from the nearby West Burn Culvert Diversion. This is routed underground and passes through the site of some of these former back-filled clay pits.

A decision was taken in March 2019 to divert the culverted West Burn, redirecting the contaminants that used to flow into the Polmadie Burn straight into the River Clyde. Here it would be so diluted as to not pose a public health risk.

While a partial fix took place to clean up the Burn in a popular park, it has highlighted the fact that contamination from underground dumps is still leaking into the environment.

Clyde Gateway is a partnership between Glasgow City Council, South Lanarkshire Council and Scottish Enterprise (with direct funding from the Scottish Government). It was established in 2008 as Scotland’s biggest and most ambitious regeneration programme.

An initial 11 Ha were remediated in 2013 at a cost of £28.7 Million. A technique was used to convert the hexavalent chromium into a less harmful and more insoluble trivalent form (also known as chromium III).

This was done by directly injecting calcium polysulphide (CaSx) at various depths into the soil at 8,000 points. The plan successfully treated around 70,000 cubic metres of contaminated soil. Contaminants are now contained and not leached into the groundwater.

Magenta at Clyde Gateway was completed at the end of 2018 and comprises 1.2 million square feet of space. It is the largest office development in Scotland, almost 100% let and with the capacity to bring 12,000 new jobs into the area.

However, another 29 Ha in Phase Two remains affected by contamination, as this was the location of the former chemical works.  It is also arguably where most of the chromium leaching is still coming from. However,  remediation is only being conducted in the 2.5ha that Clyde Gateway owns.

This started in May 2019 and will continue for a further 18 months, but again it is only a partial fix. Pollution to a wider area through the water courses will only stop with the remediation of all of Phases 2 and 3 which are currently in third party ownership.

While Glasgow City Council and SEPA had known of the contamination for over a decade, it appears that housebuilder, Avant Homes did not until February 2019. It had acquired a site at Richmond Gate in Oatlands, which runs adjacent to Polmadie Burn, from another developer who had acquired a former council housing scheme for just £1. They have plans to ultimately build 1400 new houses as part of the area’s regeneration.

Worried new residents in the first release of new builds were equally in the dark. They are now caught in a web of emails between the developer, Glasgow City Council and SEPA. They are currently trying to work out when precisely each first knew of historic contaminants in the water.

Avant Homes plan to install a permanent fence alongside the Burn, creating an immediate eyesore for residents who hoped to enjoy their new park and waterside location.

Who pays for the clean up?

Dealing with the historical contamination affecting Polmadie Burn is the responsibility of Glasgow City Council under Part 2a of the Environmental Protection Act. Under the “Polluter Pays Principle” it should be JJ White, but they no longer exist. Via mergers and acquisitions, its liabilities may now lie, arguably, with Huntsman or Solvay chemical corporations, according to a history of the firm.

There seems to have been no attempt to prove this, though a legal battle would be expensive and unlikely to succeed.

The current cost of remediating phases 2 and Phase 3 is estimated at £68.4m. Clyde Gateway has already made commitments of £14.2m in Phase 2, but just £1m in Phase 3.

There have been calls for the Scottish Government to pay for the clean-up.  Although there is no specific budget to deal with the remaining sites, it continues to use Part 2A funding and the Scottish Vacant and Derelict Land Fund.

Remediation funding requirements would also be expected to be addressed during any further development proposals.

There is a risk that the home owners in Richmond Gate could end up footing the bill for any problems caused by the pollution in their area.

It is concerning that the developer did not appear to have undertaken the necessary due diligence on the history of contaminants being conveyed onto the site prior to acquisition.

Householders have been urged to check if the planning application for their estate had an Environmental Impact Assessment (EIA) done as part of the site due diligence and preparation by Avant Homes.

The house builder’s ‘guarantees’ will end and the homeowners will be left in limbo with the long term problem until funding is found for the whole area finally remediated. It is important to get a detailed early assessment of potential contamination risks for your client, whether they are a homebuyer or acquiring a site for development. A Residential or Commercial Environmental Risk Report will provide clear, forensic insight on the site history and its proximity to potentially contaminated land.