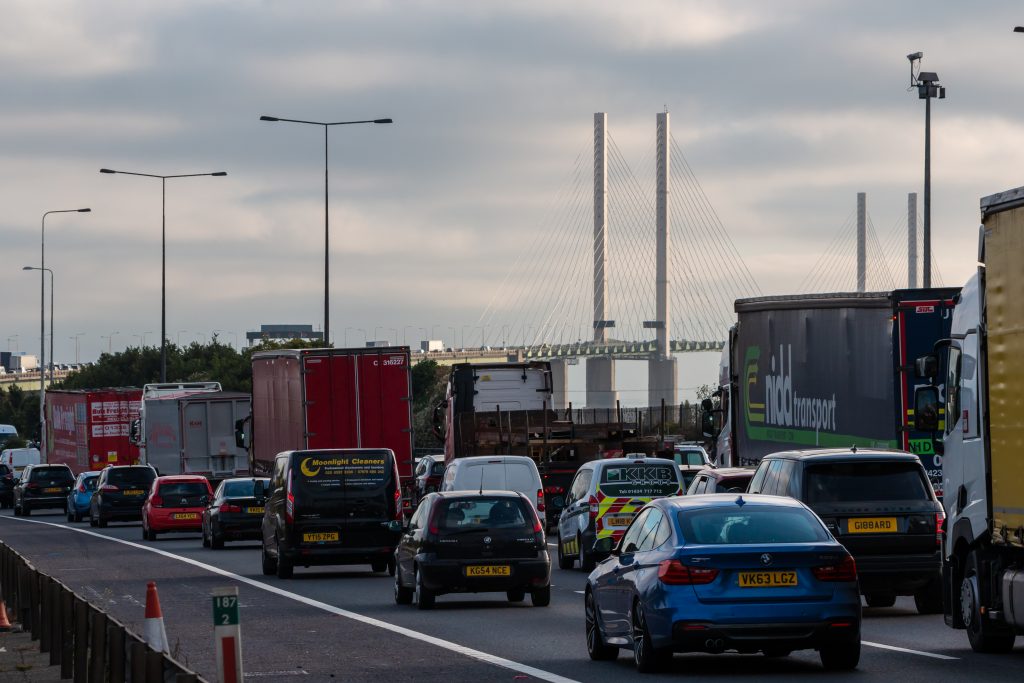 The Dirty Air of Dartford

The town of Dartford on the edge of London has served as a gateway to Kent and routes to the European continent for centuries. While trade and especially logistics has flourished, spurred on by the tunnel and bridge over the Thames, it has come at a huge cost to its residents as air pollution levels are among some of the worst in the south.

Its position on the major transport axes of the M25 London Orbital Motorway and A2 trunk route to the channel ports, together with the Bluewater shopping centre and significant housing development in recent years are the prime contributors to frequent gridlocks on all four sides of the town.

In 2018, data from the Department for Business, Energy and Industrial Strategy revealed the traffic pollution increase in Dartford between 2011 and 2016 was almost triple the national average.

Figures showed CO2 emissions from freight and passenger transport rose by 9% in that time, making traffic responsible for 54% of the carbon dioxide released in Dartford in 2016.

The 2019 Air Quality Management Report by Dartford Borough Council revealed that the town has the second highest average daily level of air pollution of all local authorities in the south east of England. Levels on some days on the A282 Dartford Tunnel Approach road have reached 70 microgrammes of Nitrogen dioxide (NO2) and particulate matter (PM) which is the equivalent of smoking 144 cigarettes a year.

But other roads through the town like London Road and town centre approach roads have reached 64 and 56 mg/cubic metre respectively, while the Bean Interchange for Bluewater has reached 58 mg/cubic metre. All of these levels are far higher than the World Health Organisation (WHO) guideline limit of 10mg/cubic metre

It forms part of a major issue for North Kent, and the neighbouring boroughs of Medway and Gravesham, which were the fourth and fifth worst offenders respectively.

The Government’s Environment Bill, launched last year, set out a clear commitment to binding targets for particulate matter. This fell short of the WHO guideline but comes in at the current EU level of 25 mg/cubic metre, which most of the country complies with. So it shows just how poor the level of pollution is that the town of Dartford and its residents regularly suffer.

Monitored levels of pollution have increased at the majority of sites across the borough. Those monitoring sites that have breached the annual objective level are already within the declared Air Quality Management Areas (AQMA’s). This isn’t just from traffic approaching the tunnel that has to frequently queue, leaving engines idling.

Much of the traffic on Dartford’s local roads is overspill traffic from the major trunk roads. According to the Department for Transport, The Crossing was designed to handle up to 135,000 vehicle movements each day, but currently it is not uncommon for 160,000 to occur on peak days. When there is an accident or tunnel closure (a frequent occurrence), this causes major gridlock, spilling out in all directions.

But traffic is also using Dartford as a hub too. Huge logistics operations have sprung up either side of the Thames, increasing HGV traffic using largely diesel engines moving to and from warehousing and roll on roll off ferry operations. A rail freight interchange had also been recently proposed, which the council had opposed and an appeal dismissed by the Secretary of State.

In recent years, the local area has been subject to massive increases in residential and commercial development which is set to continue. This includes over 15,000 new homes and commercial development in the Ebbsfleet Garden City, the £75 million pound regeneration of Dartford Town Centre as well as thousands of new homes at sites such as the Northern Gateway, St Clements Lakes and Bridge Developments.

So, when you have the perfect storm of a tunnel closure and peak departure traffic from Bluewater Shopping Centre, the entire area can be in gridlock. Add in a high pressure weather system and the pollution hangs like a thick veil over the town which is sat in a bowl created by the River Thames.

Living in the Shadow of Pollution

The British Heart Foundation has branded air pollution “a public health emergency”. The finest particulate matter (PM2.5) can have a detrimental effect to heart health, exacerbating existing conditions and increasing the risk of heart attacks and strokes.

The local press have regularly concentrated on the issues caused by air pollution for residents of the area.

In 2019, a Dartford mum, Mandy Garford set up the Dartford Clean Air project after her son caught bronchiolitis at six-weeks-old, which saw him develop a chest infection and collapsed lung. He had to be put on a ventilator to breathe, and was rushed from Dartford’s Darent Valley Hospital to the intensive care ward at King’s College Hospital in London.

Her group is lobbying local residents to walk to school or work, not letting the car idle and planting leafy vegetation to absorb and deflect traffic fumes.

Kent Live News has reported how living in the shadow of the A2 flyover close to the M25 presents multiple challenges for the residents of Green Street Green Road.  Simon Amos has lived on the road since the 1970s and describes day to day life as “Noisy, for the most part. At some point or another during the day you’ve got stationary traffic sitting up there. If they close a tunnel or anything like that, they just sit there for hours, which believe it or not is actually worse than when they’re going across normally.

“They sit there, they toot their horns, and they rev their engines. It backs up all the other roads around here as well.” Traffic following their sat nav for an alternative route will come down Green Street Green Road and create another traffic jam, increasing the localised pollution in the neighbourhood.

As well as the noise and traffic problems, Mr Amos also highlighted the poor air quality: “The air quality is appalling. During the summer, you clean your car and by the end of the day it’s covered in a thick layer of dust, which is all the pollution coming off of the motorway.”

Doreen Farmer has lived on the road for a similar time and suffers from Chronic Obstructive Pulmonary Disease (COPD). She was diagnosed with a mild condition some 15 years ago, but the last couple of years it’s really evolved. Is this due to the increase in traffic on the Dartford Crossing approach? Her response was:  “Going by the amount of people along here that are having chest trouble, I would say it was.

“It’s getting worse. When it all backs up and they all sit up there and they leave the engines running. I do sit outside but only for an hour because… there’s no point in taking my life in my hands really.”

But it’s not just the air quality that is threatening the residents at the Bean Interchange, the main junction off the A2 at the Bluewater Shopping Centre, just outside of Dartford. Two rows of modest 1930’s houses – Ightham Cottages on one side of the A2 and the ironically named Hope Cottages on the other – are in the planners’ crosshairs.

The residents have had to endure thousands of traffic movements every day, a set of pylons that loom ominously overhead and a landscape that is continually changing with new planning applications for housing developments.

The Ightham Cottages are now facing compulsory purchase as part of a £112 million overhaul of the interchange to create more capacity for more traffic from a further 20,000 new homes proposed in the area. But they may be facing limbo and many more years of poor air quality. The project may be slowed down and designs tweaked should a multi-billion pound proposed London Resort theme park also get approval that would connect to the junction. Critics have already highlighted the existing road infrastructure as a potential sticking point.

Looking to the future, air quality could improve significantly for the people of Dartford with electric vehicles, but with the best will in the world and significant investment in charging infrastructure to come; this is at least a decade away from mass adoption.

During the first Covid-19 lockdown, there was a major improvement in air quality as people stayed at home but even with current restrictions, emissions levels are back to where they were a year ago now. So, this is not an improving picture for Dartford and is all too familiar in many other traffic bottlenecks across the country.

Recognising the Risks before purchase

It is vital that conveyancers and their clients seriously consider the impact of air quality on the future enjoyment of their home for the safety of their family and for the value of the investment. This has never been more the case for those susceptible to lung conditions. There is also a growing body of evidence that suggests that just a small rise in air pollution has lead to significant increases in local rates of covid-19 infection.

Future Climate Info’s Premium Environmental Report includes Earthsense’s unique national MappAir® data. It provides a vital indicator of air quality in the vicinity of the home or business and is essential reading for residential or commercial property transactions. Looking at a search on a specific property on the Green Street Green Road close to the A2 flyover, you can see that the report clearly indicates it is within an area classified as “polluted” – the highest level within the data.

This shows that properties within this vicinity are experiencing significant and persistently high levels of Particulate Matter and Nitrogen Dioxide that with ongoing exposure could have impacts on the health of residents, especially the more vulnerable.