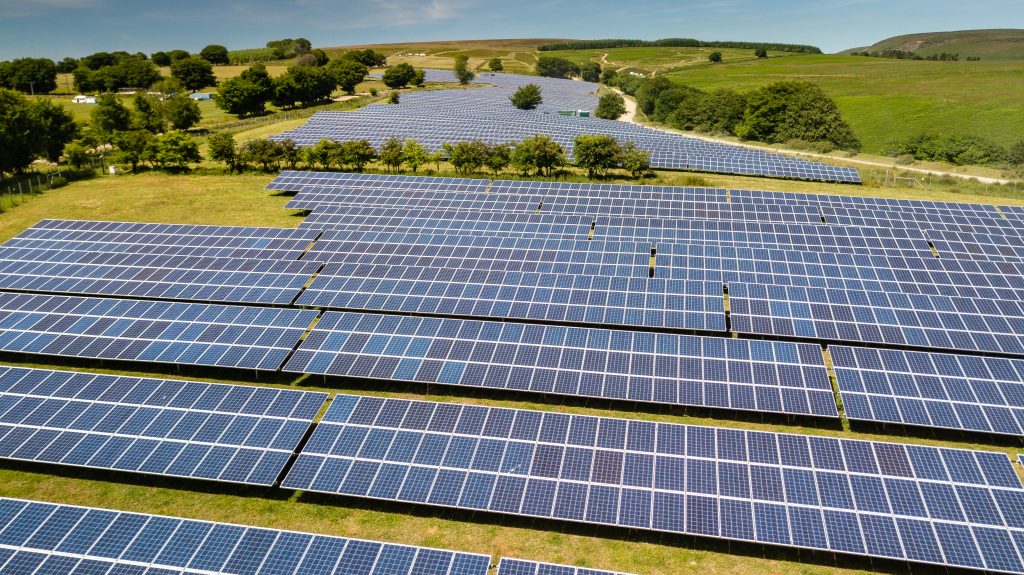 Summer is here – the sun is shining! And it seems brighter and hotter each year. As the climate changes, we need to adapt and harness this energy to create more resilient supply. Is solar energy the answer? We examine the potential and the issues that come with it.

By 2025 the Government are planning to close all coal power stations. They are a fundamental brake on our ability to reduce greenhouse gas reductions, which are having a disastrous impact on our planet.

While likely to fail on its 2020 carbon targets, the UK is catching up well on renewable energy production. Last year. 33% of all energy produced last year was from clean sources.

As of 2019, installed solar capacity was over 13 Gigawatts (GW), with peak generation less than 10GW. This equates to somewhat less than 5% of UK electricity consumption.  However, at certain times of the day, it can contribute up to a third of the energy needed.

With warmer, sunnier days, especially in the south and east, solar energy farms could be the answer for a large part of the population.

According to the International Energy Agency, solar power was the fastest-growing source of new energy worldwide last year, overtaking the growth in all other forms of power generation for the first time.

There is an abundant supply of electricity generation potential from the sun, using increasingly cheaper technology. We need to build resilience to the National Grid as it faces future high demand from electric vehicle growth.

We have the ability to use solar to meet our needs. We can become more self-reliant, especially when harnessed alongside wind energy for all-weather supply.

Large solar farms can be built in just a few months. This compares well to several years for a coal plant and even longer for a nuclear plant. And there aren’t the potentially massive environmental and health issues. The land used for solar farms creates a place where nature and wildlife can flourish. Ground beneath the solar panels can be used to graze animals or grow crops.

To get planning approval for a solar farm, rigorous conditions must be passed. Developers must account for:

Because of the large land take, they are usually developed in rural areas.  Approximately 25 acres of land is required for every 5 megawatts of installation. Based on the average annual energy consumption of a household, for every 5MW installed, a solar farm will power approximately 1,500 homes for a year.

Solar panels have a capacity factor of around 10% in the variable UK climate.  Average annual generation is roughly the installed capacity multiplied by 1000 hours – slightly under 13 Terawatt Hours (TWh) in 2018. Tp overcome the reduced efficiency, solar farms have to be on a large scale.

And this means the need to use thousands of panels. The 72MW Shotwick Solar Farm in Flintshire is the largest in the UK. Commissioned in 2016, it was built in just 6 weeks. The site is connected directly to the private infrastructure of the UK’s largest paper mill. This offsets roughly one third of their annual electricity demand & makes it the largest “private wire” solar park in Europe.

Chapel Lane solar farm in Dorset is another large site.  It is now meeting the electricity needs of 60,000 homes in Bournemouth on a summer’s day.

Solar has been met with mixed feelings by local authorities and communities. Public perception leans towards them being unattractive. However, given the choice between solar and a 20 metre tall wind turbine near their village that view may change.

There are concerns that the electrical infrastructure could have an impact on the wildlife that is displaced. There are few conclusive studies of this yet. Solar may be no worse than any other installation, like pylons or substations.

Solar farms can also take up agricultural land that would otherwise be used to support our food supply and security.  However, it is estimated by the UK solar industry that less than 5% of typical farmland plots would be taken up by solar infrastructure, leaving the vast majority for other uses.

Just to be sure, though, the Government has put a brake on this. It has cut subsidies to farmers for solar farms in an effort to curb the rapid expansion. A counter-intuitive move in the drive for renewables, you could say.

A solid counter-argument is that solar/battery farms (and onshore wind) could be the answer to protecting and stabilising farm income. Periods of drought and surface flooding have affected traditional cropping periods and yields in many areas in recent years.

One of the growth areas in solar energy purchasing has come from Local Authorities. Faced with austerity-driven budget cuts, they are motivated to reduce energy costs, a significant part of their operating overhead.

Warrington Borough Council has agreed to buy two cutting-edge solar farms to be built in Yorkshire. This makes it the first Local Authority to produce all of its own electricity from clean sources.

A 25.7MW solar farm in Hull will supply 100 per cent of the council’s electricity needs and cut its energy bills by up to £2 million a year. Electricity from a 34.7MW hybrid solar farm and 27MW battery storage system near York will also be initially sold on the open market.

Together, the two solar farms will generate enough power to supply the equivalent of more than 18,000 homes. Both sites will also feature forecourts once they are up and running, offering supercharging services for up to 24 electric vehicles simultaneously.

Cllr Russ Bowden, Leader of Warrington Borough Council, believes it will “generate an estimated operating surplus of £150 million over 30 years that can be invested back into the most important frontline services.”

These large scale installations are the focus of sector growth as far as the planning pipeline is concerned. According to Solar Media Market Research, there are some 400 sites identified, with 131 that have a realistic prospect of being approved. Investment decisions are in part stalled by Brexit for some locations.

There is a notable shift by fossil fuel firms, like Shell and BP to re-position their brands towards the acquisition of clean energy. Shell has, for example, become the largest reseller of energy from the the 69.8MWp Bradenstoke solar power plant.

Interest has also reduced in solar PV installs on individual domestic property, following the closure of the Feed-in Tariff in March of this year.

With property purchase decisions now often made for 20-30 years hence, home buyers must consider how the local area’s energy needs and changes could affect their habitat.

Future Climate Info provides conveyancers and their clients with the latest insight on energy and infrastructure changes that may affect the vicinity of a property.

As new schemes come online through planning, our Premium Environmental Report captures and alerts these in a clear and concise way. This enables your client to make an informed decision on whether their investment could be harmed or improved.

The image is over Shotwick Solar Park, courtesy of British Renewables.