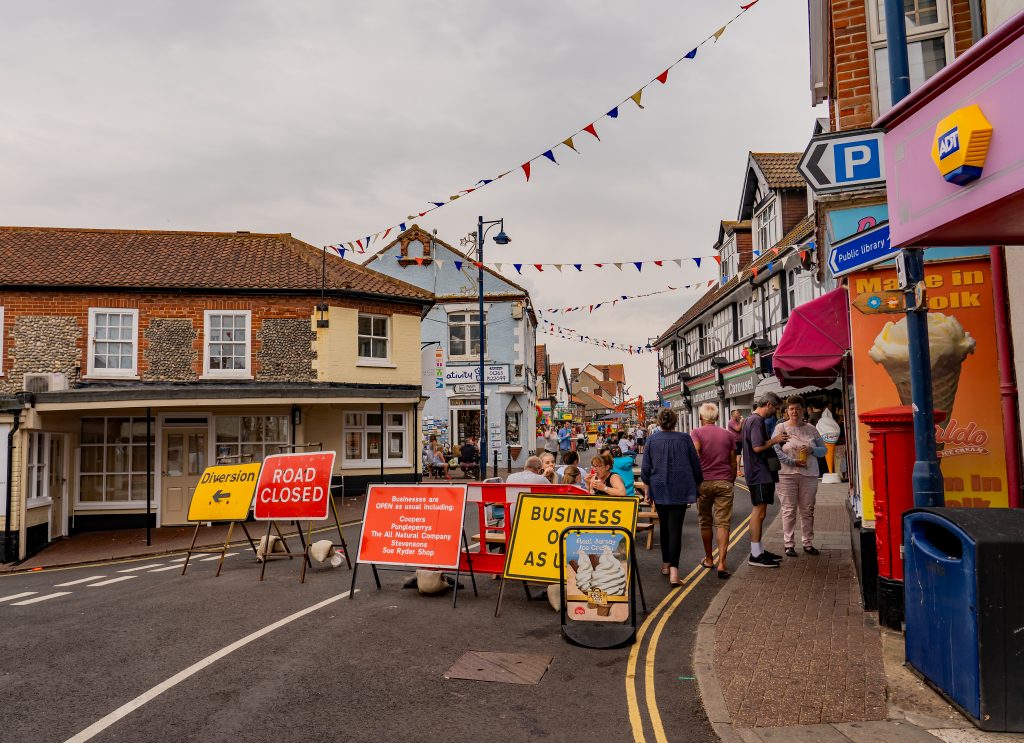 A deep sinkhole opened up in a commercial street in the heart of one of the busiest seaside resorts in Norfolk. It follows a pattern of similar holes across the county. Man-made and natural risks below ground are revealing themselves and can leave residential and commercial property exposed.

A two metre-wide, 5 metre deep hole appeared suddenly in a packed Sheringham High Street as retailers were enjoying the tourist trade on a sunny May bank holiday.

The Police and Fire Service secured the area and then Anglian Water sectioned off an area of the High Street. This remained shut for a crucial seven days while repairs and an exploration of the sewers below the hole were carried out.

The Crofton Restaurant and the Straits Fish and Chip Shop were badly affected.  The Crofton is a well loved eatery and has been in operation for over 33 years. It has been forced to close for over a month. With debts piling up, it was in fear of having to close permanently.

Even when it re-opens, the restaurant will have to put up with a scaffolding tunnel along the pavement to protect pedestrians.  The smell of sewage coming from the sinkhole wont’ be the best advert either.

Engineers have dug to a depth of eight metres beneath the hole. They have almost reached a suspected damaged sewage pipe, which appears to be the culprit. Over time, the highly soluble chalk and sand geology has eroded away and a cavity built up underneath the road before finally collapsing.

Water utilities are focused on reducing leakage and have extensive maintenance programmes to try and  avoid these incidents. But it is a near impossible task to ensure that every joint and junction is sound across the whole network.

There could be many vulnerable locations like Sheringham, where leakages and rainfall impacts combine to erode the highly soluble bedrock. This can create and enlarge voids and increase the risk of collapse of the overlying ground.

But while Norfolk is prone to natural holes, it has a long history of man-made ones too.

The Plantation House Hotel on Earlham Road in Norwich also suffered significant subsidence in April 2016 when a 6 metre deep sink hole opened up beneath it.

The hotel was forced to close after the south‐east corner of the building dropped, causing movement within the structure.

Subsidence also affected the adjacent Plantation Gardens. The public park was closed while tests  were carried out to reveal what lay beneath.

The grade II-listed structure, built in 1857, was originally at threat of being demolished. The sink hole was temporarily filled with foamed concrete and scaffolding erected to prevent further damage to the building.

A planning application has now been put in to rescue the building and convert it into a single house with a new conservatory, garage and access gate.

Norwich – Resting on a thin crust?

Norwich is no stranger to the danger of sinkholes caused by historic shallow chalk mines.  Plantation House and Gardens are close to the Earlham Road.  This was the scene of the infamous sinkhole in 1988 which swallowed a bus and first exposed the extensive legacy of chalk mining in the area.

Here, a mine dating from the 11th century gave way as the driver was pulling off. Fortunately the passengers managed to scramble off before the vehicle slipped further into the cavernous pit.

In one of the worst incidents to hit the city, two people were killed on May 11, 1936, when an 80ft-deep sinkhole swallowed three homes on Merton Road. Today, an NHS hospital, cafe, student halls of residence and a mosque are all in close proximity.

The extent of the old quarries around Plantation House are revealed through historical mapping, past land use and bedrock geology. The risks that these old shallow workings pose today are clearly identified in Future Climate Info’s Ground Stability Reports for residential and commercial property. The report for the site shows a high subsidence risk rating provided by our partner Property Assure and man made cavity evidence across a wide area.

When the house was built, there would have been no remediation or site investigation to identify subsidence risk in the way that it would be today.

Considering the extent of recorded and unrecorded chalk mines in this area, further collapses and sinkholes are likely without further investigation and remediation.

So it serves as a wake-up call to residents across Norwich and other part of Norfolk.  Their properties may well be built on a thin crust above similarly extensive shallow chalk mines.

Just add water, as they say. Well, with heavy surface rainfall events, like we have seen this month, this threat may well elevate further.

Find out what’s below

To keep the transaction going, should a potential risk be identified, Property Assure can undertake a more detailed site survey. From this sub surface investigation, crack and level monitoring can track the movement and outline what work may be required.