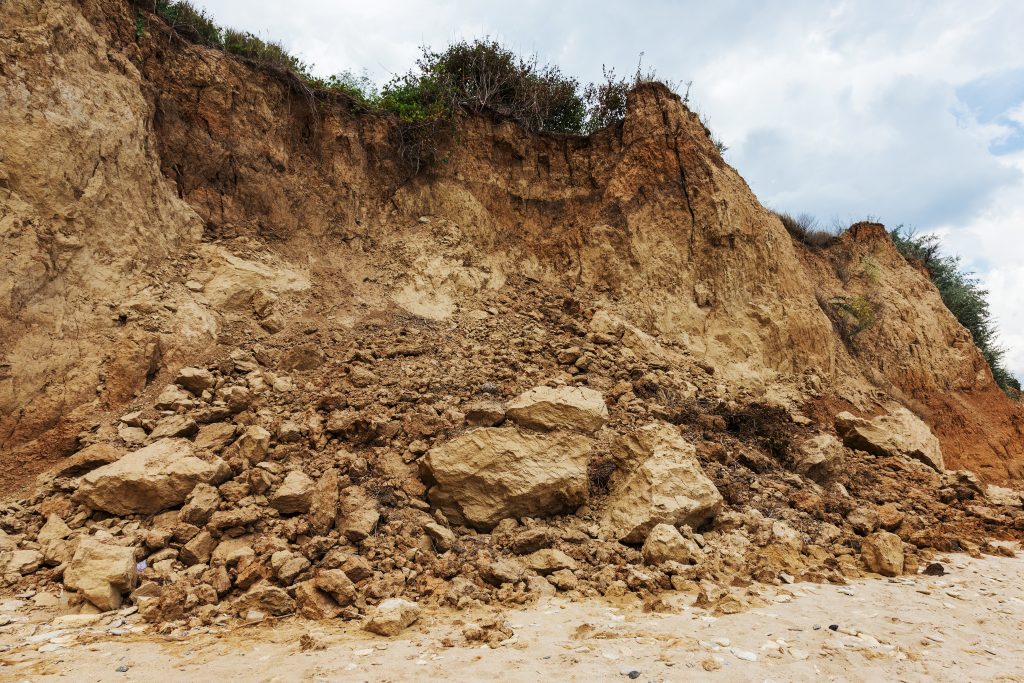 Residents living near an old quarry were forced to evacuate their homes for two weeks after a month’s worth of rain in a day triggered a huge landslide. While they have now been allowed to return, more collapses in the area and more heavy rain forecast means that the threat remains.

Thirty-five homes in Bank End Close and Stone Bank, Mansfield, Nottinghamshire were affected after part of a cliff that formed the outer edge of old Bell Quarry gave way. Of these, nineteen households were placed in emergency accommodation while Mansfield District Council undertook clearance and reinforcing works.

The incident occurred on November 7th, after a period of intensive rainfall that saw rivers in Yorkshire burst their banks the same week. Eyewitnesses reported how the top of the bank collapsed bringing trees and tons of mud and rock down onto gardens. The manager of the local No.5 Bistro told reporters how the mud “had covered fences that were 6 foot in height”.

In total, some 1300 tonnes of debris has had to be cleared. Residents have been allowed home but told not to go into their gardens.

Col Holmes, who lives in Berry Hill Road at the top of the cliff, said the council had been aware of problems with the cliff since 2017.

“The council wrote to us and said the cliff was unstable but nothing has been done about it,” he said.”Luckily nobody was hurt but there is anger among residents. We knew this was coming… and it will happen again.”

An original planning application dating from 1999 for the properties at the foot of and parallel to the cliff made little mention of the landslip risk. On revision in 2007, a buffer zone was installed along the cliff as a safety measure.

The Council described the site as “complex” and in a statement said that in 2018 they appointed Fairhurst, a specialist contractor, to assess the site and advise on how to manage it.  They said that the only risks that were recognised on the site were of “small scale rock fall.”

The council went on to say that “Since their appointment Fairhurst has been actively assessing and surveying the slope. As part of the assessment the council carried out light clearance of vegetation so that an accurate drone survey could take place. These de-vegetation works were not in the vicinity of the slip area.”

But the buffer zone was unable to mitigate the destruction of residents’ gardens last week as a mudslide was “not anticipated to happen on this scale.”

Mike Robinson, from Mansfield District Council, said: “The land slip was an unforeseen event that was caused by extreme climatic conditions.

“Our main aim now is to stabilise the cliff to safeguard people’s properties and mitigate against any future risk of land slips.”

Short term remediation works include installing concrete blocks and a temporary stone road behind the houses where the gardens used to be in order to access and clear the debris. Retaining as much vegetation on the upper slopes is key to its overall stability so that it soaks up any future water flow.

The council has had to access dedicated emergency funding from the Government under the Bellwin scheme, which provides support across the country in case of disasters or emergencies.

The scheme provides local authorities with financial assistance if they have to spend more than 0.2 percent of their annual budget in response to certain situations. It has helped the council to fund removing the debris.

Following concerns from residents about the site’s safety, Mr Robinson said the council was confident “all the correct investigations were completed prior to planning permission being granted”.

Residents have also been able to claim £120 from Nottinghamshire County Council’s Flood Hardship Fund and £500 from the Government’s Community Relief Grant which is being paid to local authorities affected by the extreme weather.

Households will also receive council tax relief for the period of their evacuation.

Is there a Pattern?

To underline how unstable parts of Mansfield are, a second landslide occurred just two weeks later at Rock Hill, only a few hundred yards away to the north of the Bell Quarry area. Part of the property’s back garden and a fence surrounding it were taken out by the falling earth.

A wall at the top of the precipice was also destroyed and bits of brick slammed into the footpath at the bottom.

Fortunately no one was walking past at the time and no one was injured.

With further rain forecast in what is proving to be an especially wet autumn for the East Midlands, questions remain about whether other former quarry slopes will become unstable in the area.

Mining History must be Considered

The events occurred a stone’s throw from the headquarters of The Coal Authority, which sits in an extensive area of past coal, limestone and sand mining for which Mansfield was renowned.

The quarrying of limestone was a strong, although small, business primarily located on the west side of the town. A tram line enabled the town to export stone as far afield as London where it was used in the lower levels of the Houses of Parliament and Trafalgar Square.

The Bell Quarry site used to be operated by the Mansfield Sand Company, which still operates today in other locations.

Mansfield has seen a large number of housing developments in recent years, especially in the desirable southern, upland part of the town. Avant Homes, Barratt and David Wilson are all marketing properties in sites in this area.

Get on a Firm Footing

Future Climate Info’s environmental reports automatically include a postcode specific subsidence risk rating from our partner Property Assure.  This, together with a comprehensive dataset of past historic mining, natural and man-made cavities provides accuracy and clarity on the risks for homebuyers and conveyancers to make further enquiries as part of their due diligence.

To keep the transaction going, should a potential risk be identified, Property Assure can undertake a more detailed site survey, together with follow on sub surface investigation, crack and level monitoring.

Here is more information on risks from past mining and ground stability and our reports. Alternatively, contact us on 01732 755 180 or email us at info@futureclimateinfo.com