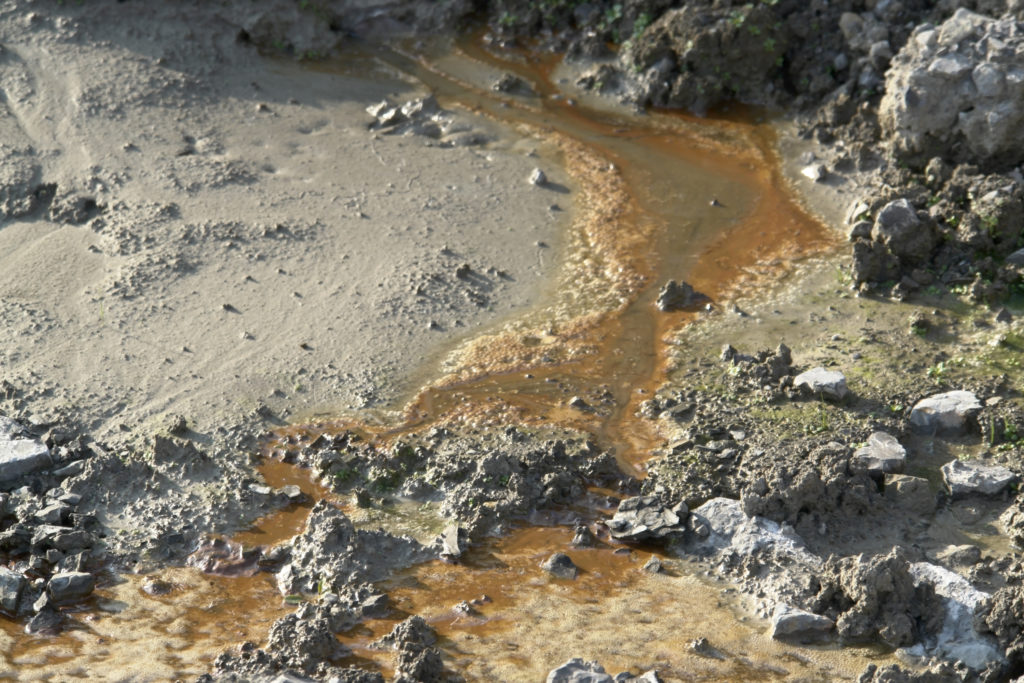 An aroma in a typical suburban garden led to the discovery of a seriously polluting chemical that had been dumped nearby. It led to years of worry and cost for the homeowners, who were left to pick up the bill to deal with contaminated land they had inherited.

Chichester Drive is part of a typical 1960s detached development in the north of Chelmsford, Essex.  The attractive cul-de-sac was built as part of the town’s continued expansion since the 1950s to become part of Springfield, the town’s most populous suburb.

Because of its location near the centre of the town, railway line and the River Chelmer, it was also close to a large area of former industry. This included mills and a number of Town Gas works to supply the town.

Looking at Future Climate Info’s historic map library, the site close to Chichester Drive had a number of in-filled land features and ponds. The area was used for gravel extraction for a period after which it was converted to use as a waste landfill.  Today, this space has been left as open land and consists of shrubs, footpaths and a pond.

Looking at the title deed history, the properties on Chichester Drive were developed in the late 1960’s by George Wimpey and Co. The gardens backed onto an area of in-filled land.  The houses were sold to the government, as part of their social housing provision and were probably bought under right to buy in the 1980’s. Some of the gardens on the street were extended in the subsequent decades, including three neighbouring properties.

By the mid 2000’s, the residents started to notice an egg-like ammonia aroma coming from their gardens. Some of them started to dig up the topsoil to see where the smell was coming from. They discovered chunks of what looked like blue rock in among the soil.

Chelmsford Borough Council were alerted to it and with the Environmental Protection Act Part 2A 1990 now in operation, they could place the site as a priority for investigation.

Laboratory sampling identified the blue material as Blue Billy, which is a form of Prussian blue – a synthesized ferrous (iron) compound. It contains a high quantity of cyanide and ammonia and is not soluble in water, meaning it can linger there for many years.

Blue Billy is particularly associated with coal gasification from older Town Gas works. It has been recognised as a problem effluent and land contaminant since the first gasworks were developed at the start of the 19th century.

Because there were very few commercial uses for Blue Billy, it was typically dumped in the nearest available land fill or pit. Until the Environmental Protection Act was enforced from 2000 and the Environment Agency established, there was very little regulation or control on what was out into former quarries and pits from local industry.

On determining the presence of Blue Billy, the Council then made a determination under Part 2A of the 1990 Act on 26th June 2009 on the affected properties. It was clear that it had polluted the soil and there was a clear transmission to the garden and residents as a result.

In their determination, they explained that the original polluters, known as “Class A liable persons” (those who dumped the Blue Billy in the first place) could not be identified.

Under the Act, this meant that the current owner-occupiers of the contaminated land in question were identified as the “appropriate persons liable for the remediation of that contaminated land” (referred to as ‘class B’ liable persons).

A three month consultation period followed between the residents, Council and the EA on the process of remediation.

Further site investigations were undertaken in spring 2010 to identify the extent and depth of the contamination and how this would affect the land and boundaries. Test results confirmed high levels of arsenic, lead, chromium, cadmium and mercury.

Remediation got underway through 2010. The employed contractors were then instructed to remove fencing, shrubbery and general waste in the gardens.

The garden was excavated to a depth of 600 mm below the original level.  Due the clear presence of seam of impacted Blue Billy a further 200 mm in depth was excavated in the contaminated area

In the area of garden excavated to a depth of 800 mm, clean sub-soil material was then placed to a thickness of 200 mm. The remaining 450 mm depth was made up of imported topsoil and turf to reinstate the garden to its’ original level.

Two in-situ verification soil samples were taken of the imported topsoil within the remediated garden. They confirmed that the topsoil was clean and complied with the Council’s specification. “This was a very unlucky situation for the property owners. The quarry back-filling was done prior to landfill permitting and the area was not identified as a historical landfill on EA records. Nor was it explicitly shown on the historical mapping to have been subject to surface tipping. So it would have been very had to identify if there had been an issue until it was discovered.

It appears that the majority of the other gardens on the street were also extended to within the former gravel pit but were not determined under Part 2A, so it was just unfortunate these residents fell foul.

The latest EA review published in April 2016, suggested that owners and occupiers had been pursued by the regulators to bear the costs of remediation for 26% of the properties determined under the regime. However, this was when capital grants were still available.

State funding for remediation was completely removed at the end of March 2017. So now, if the original polluter can’t be found, residents are more likely to become liable for the clean-up costs.

In this case, the depth of the excavation meant that the costs would have been significant for the homeowners.”

It is important to get detailed assessment at the earliest possible indication of risks from potential contamination risk for your client, whether they are a home buyer or acquiring a site for development. A Residential or Commercial Environmental Risk Report will provide clear, forensic insight on the site history and its proximity to potentially contaminated land.

For commercial developments, follow-on solutions for complex cases, fixed fee further reviews , insurance and remediation solutions can also be tailored based on the site’s unique situation.

Penny Andrews is the Compliance Director at Future Climate Info. She is also able to advise residential and commercial property lawyers on the potential issues and liabilities, as well as insurance options to safeguard transactions land from any future threat of land contamination.