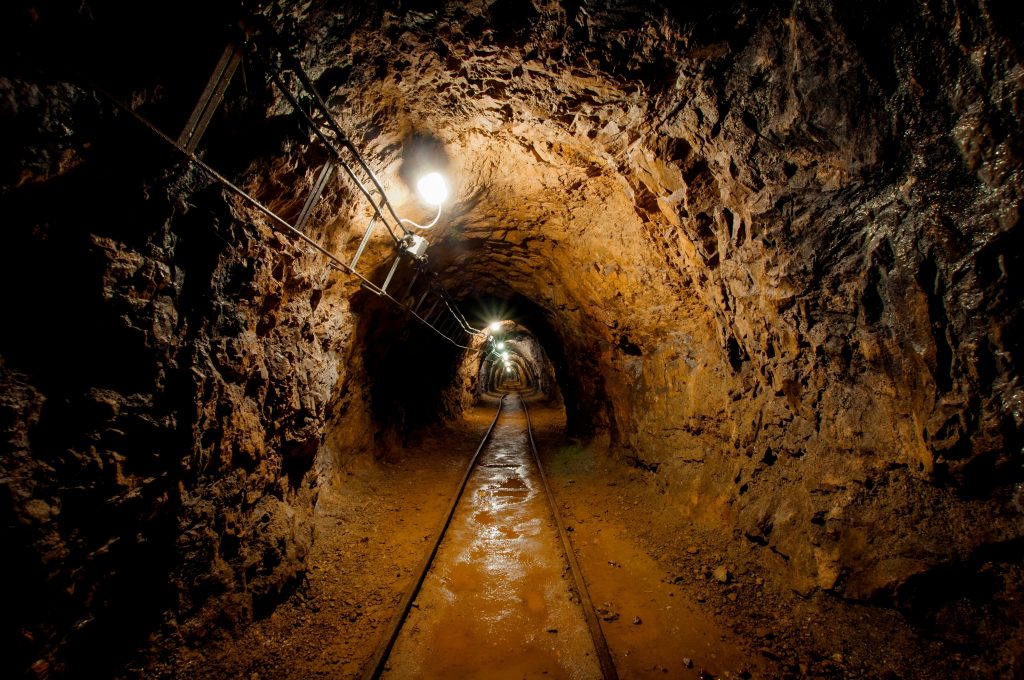 For many, Storm Christoph came and went with little incident in January, for some their houses were flooded by the nearby river in a fairly predictable manner like it had done in years past. But for the residents of Skewen, near Neath in South Wales, the flooding came from below ground, erupting out of manholes and forgotten shafts from the area’s past coal mining heritage.

A dramatic video, widely shared on social media, showed water erupting from the drains and flowing down streets and through houses and gardens directly in its path. Residents were powerless to stop the water flowing through their houses and covering possessions in thick ochre slurry.

Some 100 residents were evacuated as water poured through gardens, roads and pavements affecting eight streets. Dozens spent the night in temporary accommodation and were told they would not return for some days while Neath Port Talbot Council (NPT) and The Coal Authority (CA) investigated the source of the flooding.

First Minister Mark Drakeford confirmed that financial support would be made available to people affected, reflecting  the same level of support provided a year ago when Storms Ciara and Dennis hit Wales, just before the pandemic started. Those with insurance will receive £500 while those without will be entitled to £1,000. Residents have also raised £1,500 for the Salvation Army, who has been delivering food and clothing packages to the flood victims.

Groundwater leads to “Blow Out”

The high volume of rainfall had worked down into the hillsides above Skewen, which are pockmarked with mine shafts. Initial reports from the CA showed that water had found its way into the abandoned mine workings and into a specific shaft that emerged directly at the water table, as water found a natural point of weakness to escape.

Carl Banton, from the CA, indicated that there could have been a blockage in the drainage system could have caused the mine shaft to “blow out”, building up pressure behind the shaft entrance before it released a high quantity of water in a short space of time.

The ochre colour of the water provided the biggest clue that it contained iron ores from the mine workings.  CA officers had visually checked and drilled down into the problem mine shaft and others in the area to check for voids and were “not concerned” any would collapse. At the same time, they investigated whether groundwater was working its way through other mine shafts with the risk that it could emerge again from another location.

As fire fighters continued to pump water out of the village, Natural Resources Wales (NRW) confirmed the nearby Tennant Canal had been polluted “from mine water” and were looking at how to minimise the risk of pollution to nearby rivers, investigating any impacts on the River Neath.

Skewen has had problems in the past thanks to a high concentration of more informal, shallow coal mine workings and drift mines, where the entry or access is above water level and generally on the slope of a hill, driven horizontally into the ore seam.

Back in 2009, the surface of Ormes Road fell around half a metre, resulting in cars and delivery vans no longer being able to get to some of the houses. This was considered to be due to the proximity of the Cmw Du drift mine which was left abandoned well before the CA took on responsibility for it. There were also concerns for the impact on local water pipes, which must have been affected by the subsidence, even through at the time Welsh Water said they weren’t.

The mine water flooding in January occurred in the area of Goshen Park not far from Ormes Road and because the mines date from the early 1800s there are no details of how the shaft in question here was originally filled or capped if at all.

CA Data used as part of the FCI CON29M report shows, with black hatching, the areas it classes as ‘development high risk areas’ because of past shallow mine coal workings. 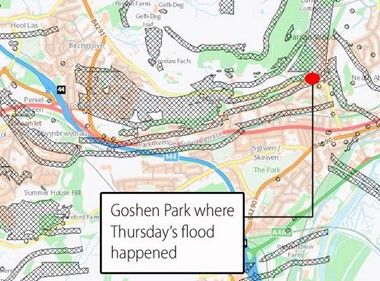 The FCI CON29M report for a property in Goshen Park clearly identifies the presence of former coal mine workings dating back to 1929. It also specifically highlights the presence of shallow workings at or near the property. Both of these necessitate the need to undertake a more detailed ground survey to reveal the extent of any shafts or workings in the vicinity from which a similar mine water incident or potential collapse could occur.

Residents Face Months Away from Home

Neath Port Talbot (NPT) Council leader Rob Jones expressed concern about the possible impact of the Skewen floods on the mental and physical wellbeing of its victims. The threat that further heavy rainfall which accumulates in the hillsides above the town, meant that residents could live in fear of another shaft blowing out at any time. The build up had been happening for many years and it is almost impossible to predict where the next shaft blockage could occur.

“It is likely that residents will feel the impact of this incident for many months to come,” he said, “not just in terms of the physical impact on their properties but also in terms of the psychological impact that often accompanies such incidents.”

Some of the residents of Sunnyland Crescent could face months of waiting before they can return home. The gas and electricity supplies will also need to be extensively checked to ensure they are undamaged. The wider area has also been affected by remediation work, as the CA starts an extensive programme. Firstly, they need to make the area around the blow-out safe, by stabilising the ground and capping the mine shaft to modern standards. This will take up to three months.

The second area of work is to prevent the reoccurrence with the installation of a mine water management scheme, to drain the water from the mines around Skewen. This will take up to 6 months.

Plaid Cymru councillor Alun Llewelyn said that “the Welsh and UK governments need to support local authorities to respond to the huge challenges of the legacy of the coal era,” which are made worse by “the deterioration of underground infrastructures and climate change affecting bad weather”.

NPT councillor Jones said that despite the CA’s intervention, the Council has commissioned an inspection of all coal tips in the county borough, owned by both the council and private companies, in order to trace accountability for the event. They will also launch a council tax exemption scheme for all properties affected by the flooding.

It is a common misconception that the Coal Authority data relates only to coal mining. In fact, the data includes thousands of non-coal mining records including minerals such as iron ores, ironstone, flagstone and aluminium. Contrary to popular belief, many of these may not be covered under the Coal Mining Subsidence Act 1991, should they be the cause of subsidence damage to a property.

The FCI CON29M Report and the FCI Premium Plus CON29M Report provide a unique AA- rated Triple-Tier insurance protection for homeowners, homebuyers or sellers. This includes a Non-Coal Minerals Search Insurance, available exclusively with FCI CON29M searches. The £50,000 cover offers protection for loss in market value and the cost of repairs to a property where subsidence damage has occurred in relation to non-coal mining features recorded in the Coal Authority data+.

Additional protection comes from FCI’s market-leading Coal Search Insurance, which includes £100,000 cover for loss-of-value caused by historic coal mining features which were not recorded in the Coal Authority data at the time of reporting but are later revealed in any subsequent CON29M search+.

Make sure your clients can secure financial peace of mind for future unknowns if they are looking to purchase a property in an area affected by past coal mining. As our climate changes, the twin threats from subsidence and mine water flooding seen in the Skewen area are becoming all the more real.

For more information on our range of Coal Mining Risk Reports, call us on 01732 755180 or email info@futureclimateinfo.com